The Site is situated on the Portland Bill Road at Portland Dorset and is open on the first Sunday of the month from May to End of August and also on Public Holidays during this period. Mesolithic means middle stone age - in our case dating back some 8300 years. Some academics predict that the total Mesolithic population of Britain never exceeded 5000 (about the same as the current population of Chickerell or Wareham, by comparison Portland's population is about 12600!!) In early Mesolithic times Britain was still attached to mainland Europe on the East Coast and sea levels were a lot lower than they are now, however a natural disaster was to change that. A recent hypothesis is that much of the remaining coastal land, already much reduced in size from the original land area, was flooded by a tsunami around 8200BP (6200 BCE), caused by a submarine landslide off the coast of Norway known as the Storegga Slide. This theory suggests "that the Storegga Slide tsunami would have had a catastrophic impact on the contemporary coastal Mesolithic population. Following the Storegga Slide tsunami, it appears, Britain finally became separated from the continent and, in cultural terms, the Mesolithic in Britain goes its own way.
Some pictures of the Culverwell site- hover over pictures for descriptive text 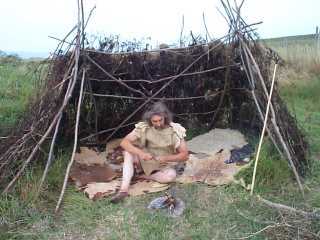 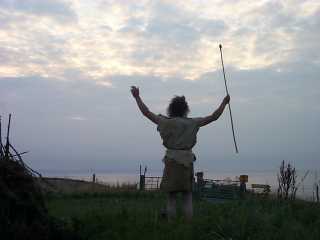 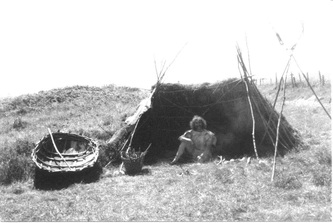 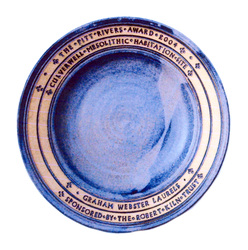 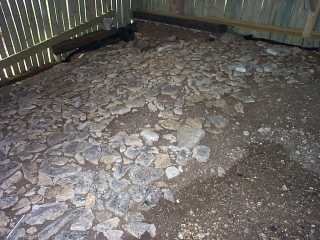 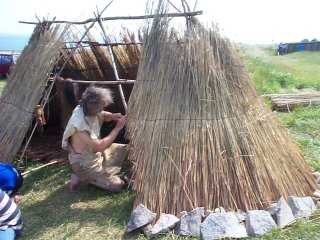 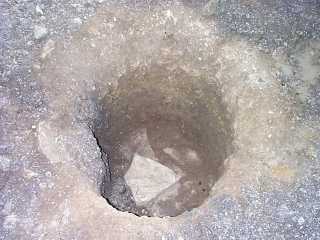 The floor provides the first known evidence in England for the use of Portland stone for building purposes.

The site provides some evidence for ritual or religious thinking, i.e. there was probably also a spiritual side to the life on the site - a polished axe head plus a pierced scallop shell and a rounded beach pebble were found under a large triangular stone in the "living area"  floor and situated adjacent to the strip lynchet.

Most of the features can be seen from a wheelchair accessible walkway. The stone floor and hearths can be clearly seen with mollusc shells still in situ.

Examples of some of the tools used and photographs of some of the excavation phases are on display at Culverwell on Open Days and leaflets and books explaining the site and other aspects of Portland’s rich heritage are available for purchase.

The award winning Culverwell Mesolithic site has world wide importance. The site has been dated between 8,000 and 8,300 years old by a series of calculations obtained from charcoal and mollusc samples.

The site was discovered by Susann Palmer in 1966 after ploughing had uncovered large quantities of mollusc shells. The site excavation was started by a small team of volunteers in 1967 and continued part time over the next 30 years. A semi permanent structure has been  erected to protect and preserve the main part of the floor and living area.

It is the oldest known site in England where there is possible evidence for sedentary, or at least semi-sedentary, occupation all the year round.

The diversity of the features on the site and their apparent orderly arrangement provides a compelling need for a complete rethink about the Mesolithic people and their life-style. They were not just aimless beach combers or nomads.